The Scottish VMware User Group (VMUG) was held this November at Dynamic Earth in Edinburgh.

It was a great location, with floor to ceiling windows giving lots of natural light and just 15 minutes walk from the central train station. 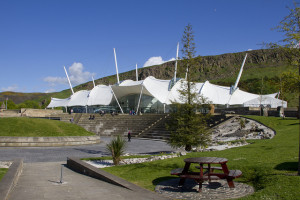 (some) of what I learned

- unmap - to free up space after storage vmotions and deletions, can be run on some storage arrays with no performance impact (check with the manufacturer how it behaves with your storage - I went back to the office and freed up 1TB of space).

**- **There is less talk about building an internal private cloud to compete with Amazon and Azure (have a read over at Simon Wardley’s blog post ‘What’s wrong with my private cloud …').

**- **There isn’t enough talk (yet) on utilising the public cloud.

- VMware VSAN is getting better and better with every release (Overview of 6.1), and has a compelling use case for ROBO deployments, and in harsh environments where solid state storage is preferable to spinning disk.

**- **Even with RAM caching, a PernixData deployment can be made even faster by swapping out the internal SSD layer with faster storage.

**- **A reminder that Latency & Throughput is what ultimately matters when it comes to storage Input / Ouput performance.

**- **An experienced (ex) user of Puppet in the audience at one session raved about how Ansible was better (summary of differences).

The next Scottish VMUG will be in April 2016.